Home > You & Your Computer > Taking your Laptop With You

Taking your Laptop With You 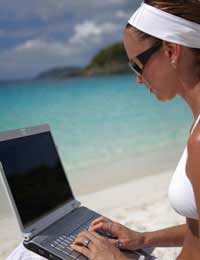 The whole idea behind a laptop computer is that it’s portable, unlike its large desktop cousin. Not only can you carry it around the home, but you can take it on the road with you for a business or a family trip, and stay in touch while you’re on your travels.Of course, some people prefer not to have computers with them on holiday, to take a break from the Internet and email. But others need to be in touch a lot of the time, and for them the laptop is a boon.

How To Use Your Laptop On The Road

The biggest revolution in the use of laptops has come with the advent of the wireless network. For homes they’ve freed things up, allowing you to access the Internet from anywhere in your house – or even your garden – for those travelling they’ve made the Internet truly portable.

It used to be the case that even if you had broadband at home, in hotels you still had to use a dial-up connection to get online with your laptop. Wireless has changed the playing field. Now entire hotels will have wireless broadband, as well as areas of airports, restaurants, bars and coffee shops – so-called Wi-Fi hotspots - which are becoming more and more common.In many places you might have to pay for wireless access, but if you need some valuable material before a business presentation, or to check your email, it can be well worth the expense.

Connecting Your Laptop To The Internet

When you’re in a hotel or wireless hotspot, it’s pretty simple to connect your laptop to the Internet. With a PC you click on start, then “Connect To” and “Show All Network Connections.”

That will bring up all those wireless connections available (it will also show your home network and others you have connected to, but the current one will be at the top). Click on “Connect,” then enter the password you’ve been given. It should be as simple as that. There will inevitably be problems at times, but they’re usually resolved quickly and easily.

Things To Be Aware Of With Your Laptop

There are several common sense things relating to laptops that you should keep in mind. They’re easily stolen, so never leave your laptop unattended in a café or public area. Don’t have it on display in your car – that’s simply temptation to a thief.

If you’re working with business files, make sure they’re encrypted, just in case the computer is stolen.

Although public wireless networks are very good, it can be easy for a hacker to use them to spy on your computer as you’re working, so avoid going to banking sites or anywhere you’ll be giving financial information such as credit card numbers.

You should also carry a spare battery for your laptop. Being portable is great, and being portable close to a plug is even better. But that’s not always possible, and laptop batteries can drain quickly, so a spare can be very useful if you’re not going to be able to recharge.You can load DVDs onto your computer (as well as music tracks) to make your laptop an entertainment centre whilst you’re away. Loading them on, rather than taking the discs with you, might fill up the hard drive, but it cuts down on your luggage, which can be very handy.