Time Management and a Family Computer: A Case Study 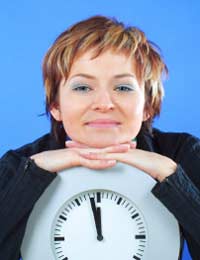 The Morgans are a fairly normal busy modern family. Ben is a graphic designer working from home, Claire works four days a week as an office manager, Lucy (age 14) is at school and Charlie (aged 3) goes to Nursery School from Monday to Thursday.

This case study looks at how they manage their different computer needs within the family.

As a graphic designer Ben needs heavyweight computer equipment, and he also needs to know that his work is safe from sticky fingers. When Lucy was a toddler Ben didn’t work from home so it wasn’t an issue; Ben’s move to home-working coincided with Lucy going to school. Because of the nature of Ben’s work he uses a mac rather than a PC and this has always been out of bounds for the children (and Claire).

Claire has access to a computer, email and the internet at work so for a long time (especially when she was working full time) she never felt the need to have a home computer. When Lucy was little very few people had ‘home computers’ so the issue didn’t arise until Charlie came along. Claire found that suddenly being cut off from the internet was frustrating – especially as there was a computer in the house.

Lucy had taken ICT classes at school and increasingly wanted to use the computer at home to play games, use the internet and (now she’s a teenager) keep in touch with friends with email, instant messenger and social networking sites. Lucy felt left out as most of her friends had access to a home computer and some of them had their own private computer in their rooms.

Until recently Charlie had shown very little interest in the computer but since starting nursery school he’s started saying he wants to ‘do computers’.

Based on the whole family’s wish for a computer they decided to buy a home PC that would live in the kitchen. They set it up with separate profiles for each family member so that Charlie would only be able to access his child friendly software. By using a parental control software package they could also give Lucy some freedom but keep an eye on how she was spending her time on the computer, and more importantly online.

Claire was keen that the computer wouldn’t take over the limited family time they all had together so it was agreed that Charlie could have half an hour before he started getting ready for bed. This meant that someone could sit with him and help him while someone else got dinner for the rest of the family. Having the computer in the kitchen made this a more sociable time.

Lucy was allowed an hour on the computer each evening, after dinner, on the understanding that she would do her homework before she did anything else. Claire found that by having the computer monitoring software she felt more relaxed about what Lucy was doing as everyone knew that any inappropriate use would be flagged.

Although Ben had his work computer he also liked to use the PC sometimes because he could check emails and pay bills without being isolated in the office away from the family.

Since Claire has gone back to work she doesn’t feel as much need to use the computer every day, apart from to keep in touch with friends and do online shopping or holiday research which she doesn’t think she should be doing at work.

After a year they have all fallen into a pattern of use with the computer that works fairly well. There are always times when more than one person wants to use the computer but generally they all work around each other.

Claire says, “I think it helps that there’s such a big gap between the kids. I can’t imagine trying to reason with a 3 and 14 year old. Lucy and Charlie’s timetables are so different that it’s only ever an issue at weekends. Actually it’s been more of a problem for Ben and me to share because we don’t have rules to follow like Charlie and Lucy so we fight more than they do!”

“In recent months Lucy has shown a bit of a flair for graphic design so for the first time she’s started showing an interest in Ben’s computer with all its amazing capabilities. I think so far he’s flattered by her interest, and delighted by her talent, but we’ll have to see how that works out. You can get graphics software for the PC but if she is serious about it then learning to use a Mac is as important as learning to use the software”