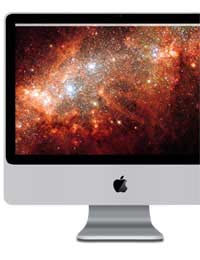 Even though computers have come down a lot in price, buying one is still an investment, so you want to make sure you purchase a machine that’s right for your needs. To do that, of course, first you have to determine your needs and desires.

If you plan on doing a lot of gaming, you’ll need to buy a PC rather than a Mac, since most game CDs only work on PCs.

For games, though, you’ll need to buy a rig with a fast processor and plenty of RAM – Random Access Memory – which you’ll need to keep up with games. One gigabyte is a minimum (especially if you’re running Windows Vista), but ideally you should have 2GB or more. You can always have more memory put in a computer, however. Good sound and video cards are also a must to keep the action very real.

Although serious gamers tend to prefer desktop computers, plenty of laptops can handle games these days, too. One of the great advantages of a desktop is that you can buy a large monitor which will offer better resolution for games. Whichever you go for, buy the best you can afford.

How portable do you want you computer to be? How much space do you have? Those are the important questions when it comes to deciding between a laptop and a desktop. With wireless broadband you can use a laptop anywhere in the house or garden (although be aware that the battery life on some isn’t so hot, so having it plugged in whenever possible is a good idea), while a desktop anchors you to one space, and you’ll need the room for a computer desk. Desktops are sturdier than laptops, and aren’t going to be dropped when being taken from room to room (getting a laptop repaired is also a lot more expensive).

If your kids will use the computer, too, then a laptop means they can take it to their rooms. However, that’s not always a good thing, especially if you want to keep an eye on their online activity. In terms of the abilities of machines, there’s not a lot to choose between the two. Both will have large hard drives (looking at 160GB), which means they can store a lot of data, and both will run the same software. In this instance it’s purely a case of what works best for your needs.

For a printer it’s worth choosing what’s called an all-in-one. This will print, copy and scan, and many will also have card readers so you can pop in the memory cards from your digital cameras and print up the pictures without even putting them on the computer.

What’s the Fuss About Netbooks?

The hottest new trend in computers is netbooks, which are, essentially, very small, light, ultraportable laptops. However, that translates into smaller screens and keyboards, as well as small hard drives. They’re useful if you’re on the road a lot (like all other computers, they’re easily connected online), but to store any amount of data you’ll also need a portable hard drive. Generally they don’t come with CD or DVD drives, either, so software has to be pre-loaded or downloaded, which limits the options. That said, they’re cheap and rapidly gaining in capacity and ability.

By now most people use broadband, rather than the old style dial-up connections to go online. It’s a must to download music, movies – virtually anything, really. But the choice is between wired and wireless broadband. If you’re using a single desktop, and it’s close enough to a phone jack, then you gain little by going wireless.

However, with a laptop that you’ll use all over the house, wireless is a must, although you need to make sure it’s secured with a code, so neighbours and others can’t piggyback on it or even hack into your computer use. If you don’t know how to do this, your local computer shop will be able to advise. Wireless modems are relatively cheap and easy to use, and do mean your computer can be where it will serve you best, rather than tethering you to a spot near a phone jack.